My idea of fitness is it should be fun! Teaching at SoulCycle, I have learned that to keep a habit, you have to enjoy what you do. If it isn’t fun, chances are it isn’t going to last long in a daily routine. SurfYogaBeeris about nourishing a lifestyle that is both fitness and fun, and SurfYogaBeer stands for balance. Surf, despite its reputation, is very intense and could be seen as a lifestyle that is very tunnel vision towards one goal. Yoga stands for nourishment and self-care for the body and mind. And beer is the little devil on the shoulder saying 'enjoy life a little'! These are the pillars that we follow — all for a little balance in life.

At an SYB Retreat, we don’t count calories nor do we worry too much about data, instead it's about building habits like consistently eating healthy, exercising in a fun and sustainable way, and balancing life so that you don’t lean towards any one of the pillars too much. I think it is more important to learn how to overcome obstacles and fear, than it is to burn a few hundred calories. And that’s what we strive to do — we get people who are scared of the water surfing by the end of the trip.

We had our first retreat in November last year with a group of twelve strangers in a house in Tamarindo, Costa Rica. For six days, everyone participated; no observers, no spectators, only players on the field. When everyone is on the playing field the game gets fun, and our retreat became a family of laughter, love, and sweat. We quickly did another retreat double the size, and again it was an atmosphere of participants in a supported environment, where failure is not only accepted but encouraged. It became a place to do the things that scared you the most, with 20 other people supporting each other along the way.

You can find us in New York City and San Diego, where we have everything from weekend surf trips, to partnered run + yoga events with local fitness studios and companies. We are a growing community of likeminded “I want to sweat and then have a drink” people. And I believe this isn’t a new thing either — Jack Kerouac wrote in Dharma Bums about yogis in the 1950s who practiced Zen yoga and mindfulness, then had a few bottles of wine. We are not so different.

Our next local East Coast event will be with Exhale at the Gansevoort Meatpacking in New York City, and on the West Coast, we will have a run down Sunset Cliffs in San Diego with Lululemon.

The next SYB retreat is going to be in Oahu, Hawaii in September. We will do everything you would want to do if you went alone, but didn’t have the friends or guts to try. We will stand-up paddle to an island, take a five-hour hike to a secret location led by our local guide, and go shark cage diving — all on top of beach workouts in the mornings, followed by vegan protein smoothies and surf sessions, that will leave you pooped and recovering with a book in the Jacuzzi at our beachfront North Shore house.

Even just thinking about this gets me smiling, and this is why my business partner Nathan Reed and I started SurfYogaBeer — to bring more smiles to the world.

SurfYogaBeer runs various, three- to seven-day retreats in Costa Rica, Hawaii, Baja, and the Hamptons, with plans for retreats in Nicaragua and Italy — as well as New York City and San Diego-based events in partnership with local businesses or fitness studios that are centered around an active lifestyle, community, and a well-balanced diet.

Upcoming events include a September retreat to Oahu, Hawaii led by west coast SYB partner Nathan Reed (Sept. 13 - 19), a New York City event in partnership with Exhale at the Gansevoort Meatpacking (date tbd), and many more. 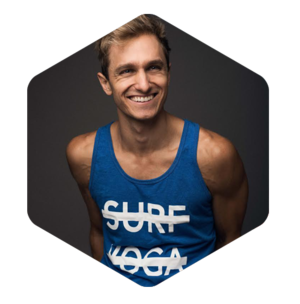 Growing up in Los Angeles, Mantas Zvinas is a Soulcycle instructor and the founder of SurfYogaBeer. He brings sunshine to his classes without too much sunburn. If he had a staring contest with 'stress,' the latter would crumble at the power of his composed attitude (and his blue eyes). Mantas brings a sense of humility to his class and works the mind, body, and SOUL. Namaste