Plenty of boutique fitness studios foster communities where socializing is encouraged and friendships (and relationships) are formed, but the vast majority of people frequenting workout classes show up, sweat, and book it before the stretch.

That’s the opposite of what you’ll encounter if you lace up to run with Surf Yoga Beer or Electric Flight Crew, two workout brands that defy established categorization but share one thing in common—members are part of sweaty societies in which the workout is a warm-up for happy hour.

In other words, the night out kicks off with squats, not shots. Beers, however, are waiting at the finish line.

With these new sweat societies, getting fit feels secondary to making friends, and high-fives and huddles with workout buddies are taken more seriously than your pace. It’s an approach that feels like part of an overall shift towards making social activities healthier—whether that happens via incorporating sweat or sobering up.

Keep reading for everything you need to know about these heart-pumping hangouts—and how you can join in on the fun. 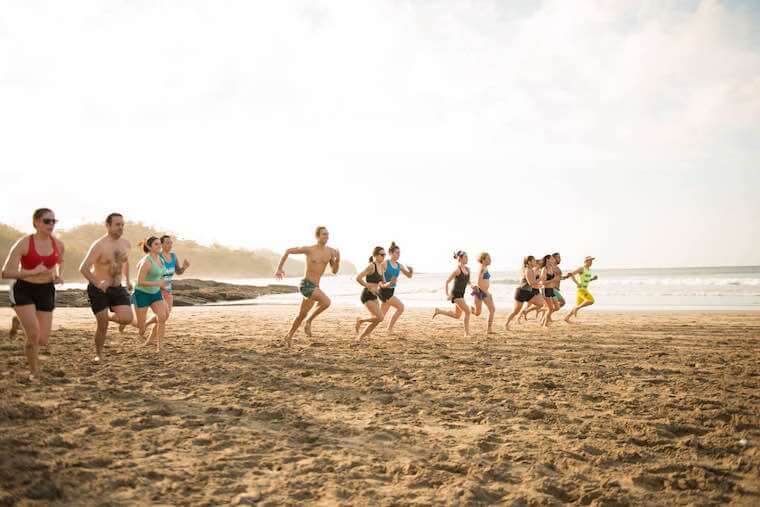 Surf Yoga Beer (SYB) was started two years ago by popular SoulCycle instructor (and southern California native) Mantas Zvinas, but in the past few months has really hit its stride. It hosts local workouts in New York City (and San Diego)—like a summer run club and weekly boot-camp classes at Bandier’s Studio B—and roughly seven retreats a year, in which the same social vibe is applied to planking and partying in spots like Nicaragua, Oahu, and the Amalfi Coast. And on December 23, the group is getting its ho-ho-ho cardio on with Santa Runs in NYC, Los Angeles, and San Francisco.

“What’s most uniquely special about SYB is the community we’ve seen built over time, which makes the retreats and events more meaningful, because those friendships directly impact how great the experiences become both during the trip and afterward,” says adventure and event director Kingsley Delacato. “It’s something you really have to see happen and experience in person. It’s pretty incredible.”

Picture a group of people who are really excited to lunge, laugh, and sip rosé together, accompanied by a designated “official hype man” (that’s a real job title, and he’s awesome), along with swag like SYB tanks and trucker hats, and overall great vibes. 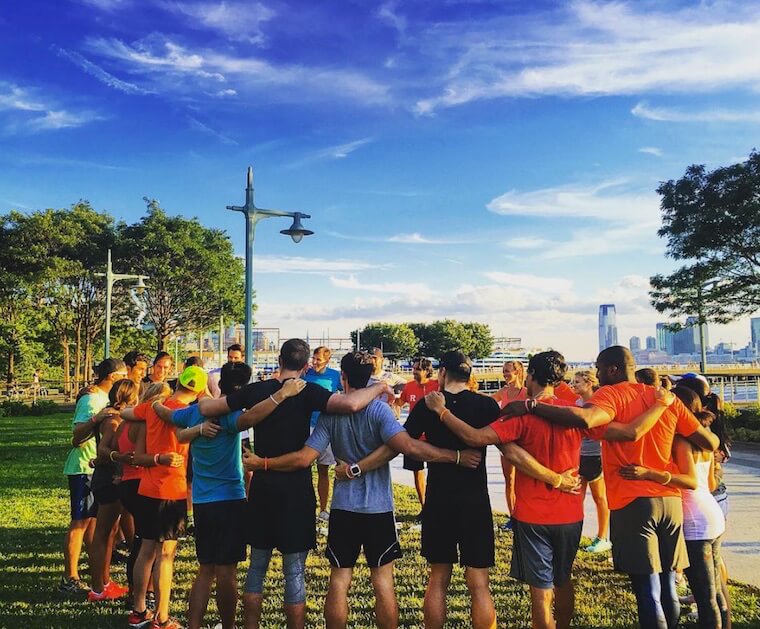 Electric Flight Crew (EFC) is huge in LA, where it started, but it just landed in NYC this past summer, kicking off with weekly Wednesday night runs followed by signature “No-Shower Happy Hours” at downtown bars (which change each month) like Hudson Hound and Tom & Jerry’s.

Runs, complete with glow-stick bracelets (mandatory) and neon yellow-green hats (optional), start with a huddle where attendees introduce themselves and a leader offers a motivational tip and a health tip. Then, there are three- and five-mile options depending on your level, and everyone meets back at the bar to chat and chug.

Twice a month, EFC also hosts “Sunday Funday” with group workouts at studio partners like Barry’s Bootcamp and YogaWorks, to add in some cross-training. “We can be defined as a social fitness club with a large focus on our members and the community we’re building,” says Tom Flaherty, an MD and Dr. Oz producer who’s leading the NYC chapter. Working out alone? So over.

Ready to lace up and get social? Check out these seven surprising ways to become a better runner(beyond just running) before you do. And if cocktails aren’t your thing, you should know about the fast-growing sober social scene that the wellness world has spawned.